CPhI North America 2019 kicked-off on Tuesday, April 30, with a keynote address from former U.S. Senator Jeff Flake (R-AZ). His talk centered around the current gridlock in Washington, adding rich context to some of the big issues up for debate, including healthcare and free trade. 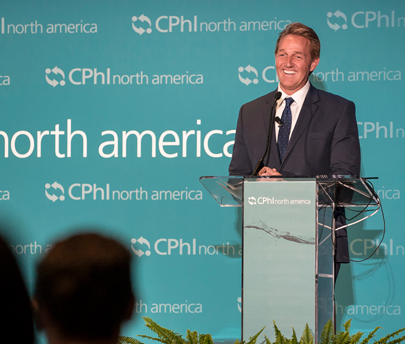 We sat down with the former senator shortly before his address to discuss the trajectory of another potent topic: immigration reform. Despite their indispensable role in the pharma supply chain, the ability of U.S. companies to hire the best talent from around the world has recently been thrown into doubt.

It’s an area that Mr. Flake has a deep affiliation with. As a newly elected Senator in 2013, Mr. Flake joined the so-called Gang of Eight, which developed a bipartisan immigration bill. He cites this as one of the last major pieces of bipartisan legislation, though it was ultimately unsuccessful (it passed the Senate but lacked support in the House). Six years on, immigration is even more politically-charged. So we asked: Is reprieve around the corner, or should we expect more of the same?

The following exchange has been lightly edited for clarity and brevity.