Pharma experts discuss the UAE’s commitment to innovation during final day of CPhI, in Abu Dhabi

Generics, which typically refer to drugs that contain the same active ingredients as branded equivalents, are launched to the market after the pharmaceutical manufacturer’s patent has expired often at a lower price and therefore creating cost efficiencies.

The panellists discussed the UAE’s commitment to become an innovative market whilst also being mindful of healthcare spending, they also discussed the longevity of substantial investment into domestic generics.

Dr Chikh, who is also the founder of Zaphyr Pharmaceuticals, said: “Government policies and efforts across the MEA region to reduce drug spending whilst simultaneously improving access to quality and cost-effective medicines for patients has resulted in the strong performance of generics. Affordability will be the key consideration for both payers and patients, and the most cost-effective options will typically be generics.

Research by CPhI MEA revealed in 2016 the UAE pharmaceutical market was worth US$3.17 billion, however a Compound Annual Growth Rate of 7.5% in the last three years has led experts to believe the value of the UAE pharma market could top over US$4.5 billion by 2021, well above the global CAGR of 5.8%.

CPhI Middle East and Africa, which was officially opened by His Excellency Sheikh Nahyan bin Mubarak al Nahyan, Minister of Tolerance, concludes today. Sponsored by the Ministry of Health and Protection (MoHaP), CPhI showcased over 290 exhibitors and attracted some 4,900 pharma professionals from around the world.

Cara Turner, Brand Director, CPhI Middle East & Africa, said: “After a successful launch in Abu Dhabi in 2018, we have cemented our position this year as the leading pharma event in the region. The continued support from MoHaP has further endorsed our decision to host the event in Abu Dhabi and we look forward to enhancing this partnership further as we aim to attract even greater numbers of high-level delegates, visitors, exhibitors and speakers next year.”

CPhI Middle East & Africa to debut in Saudi Arabia in 2021

Pharma experts discuss the UAE’s commitment to innovation during final day of CPhI, in Abu Dhabi 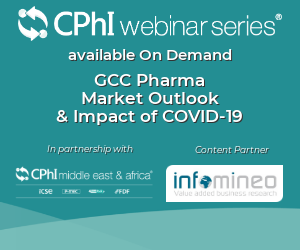